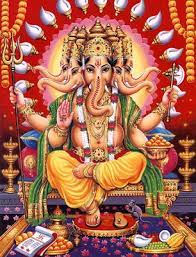 You must have looked at the idols and pictures of the Hindu deities. However, one prominent thing that many non-Hindus and even Hindus wonder about is the reason for the multiple arms.

Almost every prominent God and Goddess in the Hindu religion are portrayed with multiple hands coming out of their torso, and some even have multiple heads. This might leave many perplexed and startled.

In Hinduism, Deities are often shown with multiple arms. These many arms become visible when they are battling with cosmic forces. It shows their immense strength and power to perform numerous acts at a single time.

In Hinduism, Deities are often shown with multiple arms. These many arms become visible when they are battling with cosmic forces. It shows their immense strength and power to perform numerous acts at a single time.

The multiple arms of Hindu Gods and Goddesses show the greater power of Deities over humans.

Lord Vishnu – Hindu Got With Many Arms and Heads

Each hand holds some object which symbolizes the various qualities of that particular deity. Some hands are shown empty but with different mudras (position) of the fingers and palms that signify the character of God.

The number of arms varies basis the symbolism portrayed. Usually, Deities are shown having four arms, each holding a different object having a different significance. For instance, Lord Ganesha.

The Abhaya Mudra, translated to English, means a gesture of fearlessness (Abhaya = fearless, mudra=gesture). In this gesture, Ganesha’s lower right hand symbolizes his grace, blessings, and protection on a person’s journey through life.

Holding an axe in his upper right hand, Ganesha symbolizes detachment, which is to cut off all attachments. He holds a rope in his upper left hand to pull the devotees nearer to the spiritual path.

It is said that Ganesha offers rewards in the form of modak (sweets) for penances (sadhana) done with the modak, which he holds in his lower left hand.

At times, the Deity is also shown with more than one head. This representation symbolizes the various aspects of the character of that deity. For example, when the god Shiva is portrayed with a triple head, the central face indicates his essential character, and the flanking faces depict his fierce and blissful nature.

As per Ancient Hindu Texts,

Lord Brahma formerly possessed one head. When he created a woman, Shatarupa, from his own body, Brahma fell in love with his own female creation. He could not escape his eyes from her astounding beauty.

As Shatarupa felt shy, she tried to elude his gaze by moving away on all sides. It is believed that to follow Shatarupa wherever she moved, Brahma created his FIVE heads, facing each side, East, West, North, and South, and one facing upwards.

This behavior of Lord Brahma infuriated Lord Shiva, and as a result, he chopped off his fifth head facing upwards. Therefore, Lord Brahma is portrayed with four heads.

Like Hindu Deities, the Puranas also mention demons (Asura) having multiple arms and heads. This depiction is done to convey their superhuman power.

Want to have a look at few more hindu gods and deities click here:- Shiva and Parvati: Symbol of Love, Devotion, and Faithfulness