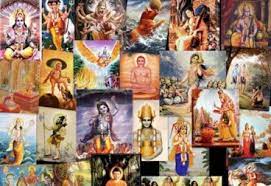 In Bhagavata Purana, it is mentioned that whenever evil triumphs over good, darkness takes over the light, tyranny rules over justice, and Lord Vishnu will reincarnate on earth to restore Dharma and guide the people on the right path.

Altogether, Vishnu has reincarnated 23 times, and every time, he’s taken a different form. It is predicted that he will appear one last time at the end of Kaliyuga, making the number 24.

Adi Purush is the first and the primary avatar of Lord Vishnu. Also known as Lord Narayana, he is depicted laying on the curls of a serpent, Adishesha. He is the source of all creation in the universe. The all-powerful; it is from his navel that the lotus sprouts, where Brahma resides.

Four Kumars were the first four conscious beings created by Lord Brahma. Named Sanaka, Sanatana, Sanandana, and Sanat Kumara, they appeared like infants, and their purpose was to assist Brahma in the creation of life.

With the appearance of a sage and a khartal and tambura in his hands, Narada has this special ability to travel between realms in moments. A storyteller and musician, he is often considered the messenger of the gods and the first journalist.

Nara and Narayana are the two twin sage avatars of Lord Vishnu. They were born to ensure truth, justice, righteousness, and other elements of Dharma on Earth. The brothers were so mighty that they could overpower Pashupathastra, a destructive weapon of Shiva, through their meditation.

Kapila Muni is a Vedic sage mentioned in the Mahabharata. He is said to have founded the Samkhya School of Philosophy. Samkhya is the formula for gaining knowledge, which includes perception, inference, and testimony of the sources.

Dattatreya, also known as Trimurti, is a sage and the master of Yoga. He is depicted as a saint with three heads representing Brahma, Vishnu, and Mahesh, and six hands. He is a combined representation of the Trinity god of Hindus.

Also known as Yajneshwara, he is the personification of Yajna, a ritual where the fire is lighted, and sacrifice is made to make wishes to the deities. In a few texts, Indra, the king of gods, has also been referred to as Yajna.

Rishabha was a preacher and a spiritual leader. He is known as the founder of Jainism. It was believed that he had escaped the cycle of birth and death. He used to guide people to the path of salvation or moksha.

Prithu was the first sacred king. He is the one responsible for all the greenery and the cultivation of all crops on earth. King Prithu dedicated his life to the service of God and taught people the ways of religion.

Dhanavantari is the God who emerged, holding a pot of Amrit (nectar of immortality) in his hand after the gods and the demons finished churning the ocean. He is also known as the God of Ayurveda and is worshipped for gaining sound health.

Mohini is a female avatar of Vishnu. She tricked the demons into handing her the Amrit, which they forcefully took from the gods after the churning of the ocean.

She, then, distributed it among the gods. Vishnu as Mohini was also responsible for cutting off the head of Rahu with Sudarshan chakra, which is today famous as the two planets in Jyotish Shastra as Rahu and Ketu.

Hayagreeva is worshipped as the God of wisdom and knowledge. He has a fair man’s body with the head of a horse. Lord Hayagreeva defeated darkness by retrieving the Vedas stolen by demons known as Madhu and Kaitaba. He restored to light and wisdom.

Also known as Veda Vyasa, he is an immortal sage who is considered responsible for the compilation and composition of many Vedas. He authored Mahabharata and introduced himself as a character in it, the father of Pandu and Dhritarashtra.

Matsya is the half fish, a half-human form of Vishnu. According to Matsya Puran, Matsya informs Manu, the leader of the humans, of the great flood and helps him save all the motile living beings, the Vedas, and the seeds of all plants.

Kurma is the half tortoise half-man form of Vishnu. During the churning of the ocean, he balances Mt. Mandara on his shell to assist the gods and the demons in the churning process. He is also believed to have supported the weight of the cosmos on his back.

Varaha is the half man and half boar avatar of Vishnu. In Hindu dharma, he slays the demon Hiranyaksha to save Bhudevi, the personification of the earth, and restores her to the surface from a sinking state using his tusks.

Narsimha is the half lion and a half-human avatar of Vishnu. He was born to end the reign of the demonic king Hiranya Kashyap and establish peace, order, righteousness, and other elements of Dharma on earth.

Vamana was a dwarf Brahmin. This avatar of Lord Vishnu comes to check the growing power of the demonic king Mahabali, which he does by tricking him during a sacrificing ceremony and sending him to the underworld.

Parshurama is a Brahmin Kshatriya. He is depicted as a sage with an axe in his hand. He was born to end the tyranny of the evil Kshatriyas, who misused their powers and made others’ lives miserable, and bring them to justice.

Lord Rama is one of the most significant and powerful deities of Hindu dharma and the lead character of the epic Ramayana. He kills the evil king Ravana to end his terrorizing rule and free his wife Sita, whom Ravana had kidnapped.

Balarama appears in Mahabharata as the elder brother of Krishna. He is known for his strength, carrying a plow, and was Duryodhana and Bhima’s guru in teaching the ‘Gada’ (the weapon). He shares many adventures with Krishna, which includes bringing a tyrannical ruler Kansa to justice.

Lord Krishna is yet another major form of Vishnu. He is known to end the reign of his tyrannical maternal uncle Kansa and his role as the advisor of the Pandavas during the Mahabharata War. He was the charioteer and guide of Arjuna in the Kurukshetra war. During the war, Lord Krishna spoke Bhagavad Gita to Arjuna, one of the greatest spiritual books of this era.

Born in Lumbini as Siddhartha Gautam, later known as Gautam Buddha, he left his family and all material possessions in search of enlightenment. He founded Buddhism and taught people ways to end all kinds of suffering through the Noble Eightfold Paths.

Kalki is the only avatar of Vishnu that is yet to be born. He will end all evil by defeating the demon Kali and start a new Satyayuga or Kalkiyuga. Kali is all the negative emotions and elements personified into one. Kalki is depicted as a warrior riding a white horse and holding a shining sword.

Despite the difference in form or time, all his incarnations had one common goal, i.e., to end all evil and re-establish Dharma, the path to salvation. It is for this reason that Lord Vishnu is known as the protector and preserver of the universe.

Looking for more on Avatars and gods click here:-Lord Vishnu is one of the Hindu Gods and Dieties – Omnipresent – Protector- Preserver