Meaning and Defination of Vishnu Avatar 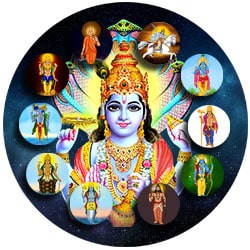 Meaning and Definition of Vishnu Avatar

Avatar (also known as Incarnation) in Sanskrit means – descent. It is the “appearance” or “manifestation” of God, Deity, or Supreme Self in an earthly embodiment. The concept of an avatar is most often associated with Lord Vishnu though Lord Shiva, Lord Brahma, and Goddess Parvati or Adi Shakti also have many Avatars or Incarnations.

Let us understand the different types of Avatar Lord Vishnu has taken. Avatars are broadly classified into two kinds. When Lord Vishnu Himself descends on earth, He is called Sakshaty-Avatara. When He indirectly empowers some living entity to represent him, then that living entity is called an Avesa-Avatara.

There are different versions of the Dashavatar list in different scriptures. The Agni, Padma, Garuda, Linga, Narada, Skanda, and Varaha Puranas list Buddha among Vishnu avatars. Some scriptures do not mention Buddha and Balarama in their list of Dashavatar. But, Vayu Purana replaces them with Dattatreya and Vyasa.

The most popular ten avatars based on many Puranas are Matsya, Kurma, Varaha, Narasimha, Vamana, Parashurama, Rama, Krishna, Buddha, and Kalki.

Matsya is the half fish, a half-human form of Vishnu. According to Matsya Puran, Matsya informs Manu, the leader of the humans, of the great flood and helps him save all the motile living beings, the Vedas, and the seeds of all plants.

Kurma is the half tortoise half-man form of Vishnu. During the churning of the ocean (Samudra Manthan), he balances Mount Mandara on his shell to assist the gods and the demons in the churning process. He is also believed to have supported the weight of the cosmos on his back.

Varaha is the half man and half boar avatar of Vishnu. In Hindu dharma, he slays the demon Hiranyaksha to save Bhudevi, the personification of the earth and restores her back to the surface from a sinking state using his tusks.

Narsimha is the half lion and a half-human avatar of Vishnu. He was born to end the reign of the demonic king Hiranya Kashyap and establish peace, order, righteousness, and other elements of dharma on earth.

The 5th avatar of Vishnu, Vamana, was a dwarf Brahmin. This avatar of Lord Vishnu comes to check the growing power of the demonic king Mahabali, which he does by tricking him during a sacrificing ceremony and sending him to the underworld.

Parshurama is a Brahmin Kshatriya avatar of Lord Vishnu. He is depicted as a sage with an axe in his hand. He was born to end the tyranny of the evil Kshatriyas, who misused their powers and made others’ lives miserable and bring them to justice.

Lord Rama is one of the most significant and powerful deities of Hindu dharma and the lead character of the epic Ramayana. He kills the evil king Ravana to end his terrorizing rule and free his wife Sita, whom Ravana had kidnapped.

Lord Krishna is yet another major form of Lord Vishnu. He is known to end the reign of his tyrannical maternal uncle Kansa and his role as the advisor or the Pandavas and the charioteer and guide of Arjuna in Mahabharata.

Siddhartha Gautam, later known as Gautam Buddha, left his family and all material possession in search of enlightenment. He founded Buddhism and taught people ways to end all kinds of suffering through the Noble Eightfold Paths.

Kalki is the only avatar of Vishnu that is yet to be born. He will end all evil by defeating the demon Kali and start a new Satyayuga or Kalkiyuga. Kali is all the negative emotions and elements personified into one. Kalki is depicted as a warrior riding a white horse and holding a shining sword.

Looking for more on astrology and mythology click here:-What does Om Namah Shivaya mean and its importance?