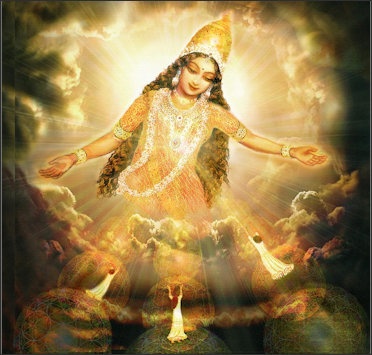 Vedas are universally accepted as the oldest books of humankind. For the Hindus, they are not just ordinary books but are also the fountainhead of all knowledge, whether of the material world or the spiritual world. They are 4 in number; Rigveda, Yajurveda, Samaveda, and Atharvaveda.

Ushas is the Vedic Goddess of the sunrise in Hindu dharma. In Rigveda, the Goddess Ushas is continually associated with and often recognized with the dawn. She offers the existence of all of the living creatures of the universe and makes us breathe properly. She additionally gives a sound mind and a sound body.

Goddess Ushas – Goddess of Dawn as per the Vedas

Ushas is the most prominent Goddess in Vedic literature. However, she has her own identity, and most people consider her as important as the three important male deities named Agni, Soma, and Indra.

Ushas is stated in numerous hymns of the Rigveda. Forty of its hymns are devoted to her, while her name appears in different extra hymns. In the Rig Veda, she is described as a young woman drawn riding in a golden chariot in her direction throughout the sky. Due to her color, she is often recognized among the reddish cows. Both are released through Indra from Vala cave at the beginning of time. It is stated that one hundred horses draw her.

Goddess Usha is generally associated with light and wealth. She reveals herself with the daily coming of the light to the world. She passes forth light and is accompanied by the Sun. She alone leads the Sun and discloses her excellence and fire to her world.

She is honored by the worshippers for driving away oppressive darkness and chasing away evil spirits. She sets everything in motion and sends people off from their duties after completing the day. She carries not just light to the sleeping humankind but hope, happiness, riches, and all the good things. She has the magic of looking at everybody at the same time.

The ancient Vedic tradition has viewed Ushas as the harbinger of light, awareness, and activity. People separated time into the form of day and night. All creation rests at night, and the whole of creation is active in the day. The transformation which takes place from night today is known to be the attribute of Ushas. She is also highly popular as the pioneer of the day as she leads the Sun into throwing his glance on the earth. Thus, revealing his immense power and warmth to the world’s beings. So, she has been regarded as the light or the dawn of human consciousness.

Ushas is regarded as the daughter of Dyaus Pita, Father of the sky. She is the elder sister of Ratri, the Night. When Ushas rises, the night is dark and deep, and the sky begins to adorn her. Ushas’s’ sister Ratri is the cosmic energy of the night, whose darkness engulfs our consciousness. And enforces a repose that heals and revives by a temporary hibernation of mind and senses.

Ushas follows Ratri as surely as spring follows winter, in an unfailing rhythm called ”Rta” in Sanskrit. Ushas is the cosmic energy that immediately precedes the start of each earthly day. Ushas gently steals into the earth’s atmosphere just before her consort Surya, Sun, suffusing the skies with golden-orange luminosity.

Ushas is ranked as a divinity in her own right. She is considered a celestial Yogini, a form of Goddess, who is held as spiritual. Ushas is also a feminine divinity who stimulates the nobility from the innermost depths of the human soul. She is the force that propels even the Gods into action. As the mother of the Ashwins, she is also worshipped as the Shakti. She has the power that can heal and bless people with immense knowledge and grace.

We can worship the Goddess Ushas in the following manner.

You are the activator of all living beings. Your great supreme power controls everyone.

During the dawn time, various pujas are conducted in the temples. Only through your grace are people worshipping the god in the dawn and getting benefits.

You are interlinked with various Vedic gods. By worshipping you, we can attain their blessings also.
You are given the benefits of doing various types of rituals.

By worshipping you, all the Tridevi will get satisfied.

You are curing the various ailments of the people.

You are controlling the mind and body of every living being. We will get good thoughts in our minds by worshipping you, and bad thoughts will be permanently erased from our minds.

After we depart from this world, kindly make us enter heaven’s path.

Sri Aurobindo praised her, and she is worshiped during the Chhath Puja festival in India and Nepal.

She can be worshiped in the dawn by chanting her names and praying to her in the form of Adi Shakti.

If you catch the light just before the Sun appears, greet her early in the morning. Her name is Ushas, The Goddess of Dawn.

Here are other astral and cosmic insights for you to have a look at:-13 Powerful Saraswati Mantra For Education and Knowledge