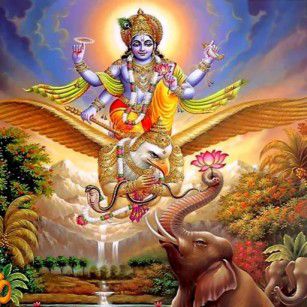 Vishnu is a supreme diety often linked to an ocean of milk, to rivers, to woods, to farmlands and pasturelands. He wears silk, assuming the existence of farmers, spinners, weavers, dyers and washers. Lord Vishnu is called by many names and a thousand names are given in the book ” Vishnu Sahasranama”. The name Vishnu has its roots in a Sanskrit word ‘Vish ‘, which means to pervade. God Vishnu is all pervading but known more by the avatars (incarnation) he took on the earth.

Where does Vishnu “the Preserver or the Protector.” reside?

Vishnu is one of the three principal cult of Hinduism. He is one of the three supreme deities Trimurti of Hinduism. He is also known as Narayana and Hari.Lord Vishnu is known as “the Preserver or the Protector.” It is said that Vishnu resides in the milky waters of Vaikunth. He lies on a bed made of the coils of the thousand hooded great serpent. Goddess Lakshmi, his consort attends upon him. The ocean stands for bliss and consciousness. The serpent for time, diversity, desire and illusion. Whereas goddess Lakshmi for the material things and powers of the creation.

The color of Vishnu is the color of a dark blue cloud. It is the color of the sky, denoting his cosmic dimensions. It also denotes his connection with the Vedic gods of rain and thunder. Along with his relationship with the earth. He is usually depicted with one face, four arms, usually in a standing posture or in a resting posture. He wears a necklace made of the famous Kaustubha gem. It rests on his left chest and another garland of flowers and gems by name Vaijayanti.

His four arms hold sankha (a conch), chakra (discus), gada (mace) and padma (lotus). The conch stands for the five elements. They are the sound of AUM, salagrama, goddess Lakshmi, the waters, purity and perfection.

The discus is the terrible weapon of Vishnu which he used to destroy the evil and protect the righteous. It represents the light bearing sun, which illuminates and removes darkness.

It also stands for higher consciousness which destroys all illusions. The mace represent the power of knowledge. Whereas the lotus symbolizes beauty, harmony, purity, water element, creation and self realization.

According to Puranas, Vishnu is the ultimate omnipresent reality. Following is a sequence of 10 mortal incarnations, or principal avatars of Vishnu:

First incarnation of Vishnu : Matsya or the Fish incarnation. In this form Vishnu saved the Saint Vaivaswata, the hindu variety of the biblical Noah (or vice versa).

Second incarnation of Vishnu : Kurma or the Turtle incarnation. During the churning of the Ocean, Vishnu as Koorma (or Kurma) offered his back. It acted as a pivot on which to rest the Mount Mandara, used as a churning stick by gods and demons.

Fourth incarnation of Vishnu : Narasingha or the Lion incarnation. Taking a form of a creature that was half-lion and half-man. Vishnu killed the demon Hiranyashasipu. He was the brother of Hiranyaksha, who had gained the boon of immunity from attacks by man, beast or god.

Fifth incarnation of Vishnu : Vamana or the Dwarf incarnation. He killed the demon Bali, who had gained dominion over the Earth and had chased the gods from the heavens.

Sixth incarnation of Vishnu : Parasurama. he killed the King Kartavirya. For he had stolen the holy cow Kamadhenu, which could grant all desires.

Seventh incarnation of Vishnu : Ram : he killed the demon King Ravana, who had abducted Sita.

Eigth incarnation of Vishnu : Krishna. He killed Kansa, son of a demon and the tyrannical King of Mathura.

Ninth incarnation of Vishnu : Buddha : Vishnu incarnated to remove suffering from the world.

Tenth Incarnation of Vishnu : Kalki. He is still to come at the end of the Kaliyuga or the present age of decline. When Vishnu will appear in person on Earth, seated on a white horse, Kalki, which is his tenth incarnation.

Why is Vishnu so important?

Vishnu represents both the power of creation and destruction. They both work together to find the balance, order, or dharma in the world. Vishnu can well be seen as the model of an ideal leader that our Vedic forefathers envisioned.