The origin of Puja and its methods 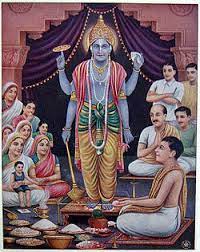 The origin of Puja and its methods

The word puja is Sanskrit, and means reverence, honour, homage, adoration and worship. Puja, the loving offering of light, flowers, and water or food to the divine, is the essential ritual of Hinduism. For the worshipper, the divine is visible in the image, and the divinity sees the worshipper.

In Hinduism we come across a common method of worship called puja or pooja. Unlike the elaborate sacrificial ceremonies, it can be performed by anyone except those who have incurred impurity due to menstruation or the death of a family member, etc.

A puja can either be a simple ritual worship or a very complicated one, depending upon the way it is performed. One may perform it to overcome a problem, seek divine help, or render devotional service to the family deities. For many people, puja is part of the daily sacrifice (nitya karma).

Many interpretations can be given in Hinduism to the word “puja” which consists of two letters, namely, “pa” and “ja.” Pa” means “parayana” or continuous repetition of the names of God and “ja” means “japa” or continuous mental recitation of the names of God. According to this interpretation “puja” is essentially a kind of Hindu worship. In which both parayanam and japam are practiced by the devotees.

In a puja ceremony, Hindus offer both flowers and water to the deity. Lastly, puja has a spiritual dimension also. Puja means that form of worship through which we give birth to or awaken the indwelling spirit in us. Here “pu’ means “purusha,” meaning the eternal self and “ja” means “janma,” meaning to give birth to or to awaken.

According to Hindu beliefs, during the puja the deity, which is normally an idol or a statue, comes to life. The statue or the form of the deity is brought to life externally. It is through the chanting of mantras or special invocations. It is invoked through the performance of ‘prana pratishta’ or establishing the life breath in it. Similarly, the indwelling spirit in the worshipper is awakened because of his sincerity, concentration, devotion, and divine grace. This is symbolically represented as ‘prasad,” grace or blessing from above.

How puja is conducted to God

Hindus perform pujas in various ways. The commonest form of worship follows a well-established sequence of actions, or procedures. The puja ceremony is the idea of honoring the deity by paying respects and making offerings. This is very much rooted in Vedic ritualism and sacrificial ceremonies.

During the ceremony, the first step involves uttering an invocation, mantra or prayer, inviting the chosen god to visit the place of worship. This is indicated to him by specifying the directions, the time and the place name. This is generally performed either by a mediating priest or the worshipper himself.

Once it is done, it is assumed that the deity has agreed to come and arrived at the designated place as requested. The worshipper then washes his feet with a symbolic gesture and offers him a seat with utmost respect. The worshipper next offers him water to drink. It is done by placing a glass in front of the idol or dropping water with a small spoon or ladle. Once he is seated, as a mark of utmost reverence, the feet is washed with ceremonial water.

After that, the idol is bathed with water, milk, honey, etc., and massaged with various perfumes and scented pastes. Such as turmeric powder, sandal paste and curd mixed with ghee to the accompaniment of various mantras. This usually end with “samarpayami,” meaning, “I have offered.” After the bathing ceremony, the deity is offered new clothes to wear during the ceremony. This is symbolically represented either by a peace of cotton thread in simple ceremonies or real clothes in more organized ones.

Having made him comfortable in the new attire and honoring him with a high seat. Next the worshipper then makes him a series of offerings. These include pushpam (flowers), phalam (fruit), gandham (sandal paste), dhupam (incense), deepam (light), naivedyam (food), jalam (water). Next mantram is uttered (recitation of sacred verses) and mantra-pushpam (a sacred flower). All these arrangements, devotional offerings and respectful prayers are intended to make the deity feel comfortable and at home in the new surroundings and enter a positive state of mind.

The purpose of such an elaborate procedure is to build rapport with the deity and earn his love and grace. For which he specifically chooses prayers and hymns that extol the virtues, triumphs and greatness of the deity.The puja ceremony of the Hindus, generally ends with the offering of aarati or sacred flame to the deity. Which is followed by the distribution of prasadam, or the remains of the offering.

Why is puja held high and an integral part of human existence?

The prayers and the mantras are chanted during the puja ceremony to create an atmosphere of sacred feelings. This is done in and around the house to add sanctity and purity to the whole environment. Thus, in Hinduism puja is essentially a religious ritual and a form of worship.

Mentally and spiritually, it is an expression of devotion and a method of direct communion with God. It assumes many forms, including invoking divine power to delude and destroy enemies or acquire supernatural powers. Symbolically, it represents the symbolic act of offering of our lives and activities to God which culminates with the Grace of God as the reward (prasadam) for the service rendered, which leads to the blissful state of liberation.