A comprehensive insight into the aura of Goddess Kali. 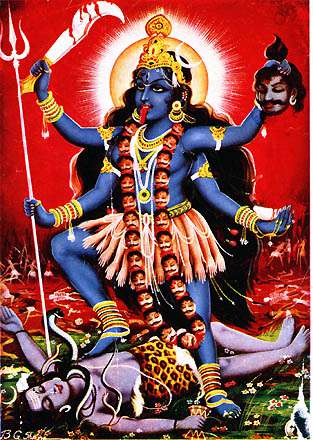 A comprehensive insight into the aura of Goddess Kali

Kali is the fearful and ferocious form of the mother goddess. Kali Ma: the divine mother, appears fearsome. She is the Hindu goddess of time, creation, preservation, and destruction. As fearsome as she may appear, she is the most compassionate goddess of them all. Here she is depicted as having born from the brow of Goddess Durga.

Kali comes from the Sanskrit root word Kal which means time. It is partly correct to say Kali is the goddess of death. As she brings the death of the ego as the illusory self-centered view of reality. Nowhere in the Hindu stories is she seen killing anything but demons. Moreover she is not associated with the process of human dying like the Hindu god Yama.

Of all the forms of Devi, She is the most compassionate. This is because she provides moksha or liberation to her children. The ego sees Mother Kali and trembles with fear because the ego sees in her its own eventual demise. A person who is attached to his or her ego will not get the sympathy of Mother Kali. Instead she will appear in a fearsome form. A mature soul always engages in spiritual practice to remove the illusion of the ego. He or she sees Mother Kali to be very sweet, affectionate. She is always seen overflowing with incomprehensible love for her children.

She rides a lion. She wears a garland of severed heads and a skirt of dismembered arms, or nothing at all. Her dark, disheveled hair flows freely. Her eyes are red with intoxication and rage. Her red tongue sticks out under sharp white fangs that shine against blue black skin. Her many hands carry a sword, a trident, a severed head dripping fresh blood. Besides that she holds a kapala or skull cup catching the blood. She is often accompanied by serpents and a jackal. She dances in graveyards.

At first glance Kali ma may appear more like a demon and less like a loving goddess. But she is misunderstood. She doesn’t fit into neatly packed boxes of good and evil. In truth, she transcends both

The History of Goddess Kali

Kali ma goddess is willing and able to do the necessary dark deeds that others are not capable of. She is willing to destroy the ego. She happily kills demons and laps up their blood. Her love is so fierce that she destroys evil in order to grant liberation. She destroys our attachment to the temporary body. This reminds us to enjoy the beauty of life, because death is certainly coming.

Her garland of severed heads represents her children. It indicates liberation from the illusion of the ego. Kali ma shows us that this body is temporary and reminds us not to become too attached to it. Her garland is either shown with 108 or 51 heads. The number 108 is auspicious in Hinduism. It represents the wholeness of existence, as well as the Earth, Moon, and Sun. The number 51 represents the 51 characters of the Sanskrit language—the origin of sound. Kali is often considered the mother of language and the mother of all mantras.

Salvation and Practicality of Goddess Kali

Kali’s boon is freedom, the freedom of the child to revel in the moment. It is only possible after confrontation or acceptance of death. Kali is Mother to her devotees not because she protects them. But because she reveals to them their mortality and thus releases them to act and live in reality. She releases them from the incredible, binding web of material world. Such as “adult” pretense, practicality, and rationality.

Hinduism’s Vedic Gods: The Secrets of the Devas

Ganesh Chaturdashi and its importance?

About Hanuman or Anjaneya

Hinduism’s idea of atman, or the eternal soul